skip to main | skip to sidebar

HopeHouse Classes Back in Session

Hello DHF Family,
﻿ ﻿
I’m excited to announce that the Hope House is officially open! Classes are in session! With great anticipation and careful planning I’ve been hard at work locating new teachers, new ideas, and new classes for our village banks. My hope is that our classes provide our women with new ways to expand their businesses and their bank accounts. Last week our newest addition to the project, Delia Torres, taught a class full of women three beautiful new earring designs and a fabulous bracelet. As we speak 15 loan recipients are learning how to make lemon pie with new Instructor Mari Marruffo…it smells so delicious! In addition to our traditional classes (Jewelry, Crafts, Culinary, and Crochet), I’ll be including Basic Computer Classes, Sewing, and Embroidery to our class listings in April.
﻿ ﻿
In other news this past weekend Hope House Instructors and loan recipients, Charo Yupanqui and Alicia Linares participated in an artisan fair organized by the Instituto Nacional de Cultural (National Institute of Culture) in celebration of Artisan Day. You may remember that the mom/daughter duo participated in a national reality show in the search for the best crocheters in Peru. It was an exciting event and both Charo and Alicia sold more than $200 in crochet products. It was the first time that both began to view their work through the lens of an artisan. Thanks to the INC we’ll be participating in at least 3 more artisan fairs throughout the year!
Best,
Des
Posted by Desirée Ledet at 5:05 PM No comments:

Here in Austin, Cajamarca, & Chicago a team of folks are hard at work on our 2011 Annual Report, putting on the finishing touches -- at this point we’re in the whipped cream & sprinkles stage. Before I type another word – let me praise the goodness of Chicago’s own Tracy Kuramoto, our fantastic volunteer graphic designer. A true prince among men.

I know most annual reports are often met with respectful yawns. But I swear, ours is shaping up to be cool. Because we’ve got such good news to share -- 2011 was huge! We more than doubled in size in all key areas. It was inspiring to truly begin to see the evidence of stable, sustained prosperity in the lives of the women we serve.

One of those success points is another year of 100% loan payback. We think that’s amazing. Des, our newly married program director, blogged recently that Las Progresistas won our award for 2011 Village Bank of the Year…but we haven’t told you why they won. So, here’s a sneak peek of our annual report (look for it tomorrow on our homepage) and the back story of Las Progresistas to brighten your day.

WHAT PROGRESS LOOKS LIKE
DiscoverHope is proud to maintain a 100% microloan payback rate. A woman’s payback money directly circulates into additional loans for herself and her village bank. That does not mean, however, that no woman has ever defaulted on a microloan. That would be unrealistic. Instead, each village bank, as a group, takes ultimate responsibility to cover the microloan. Such adversity is rare, but when it happens, village banks persevere, overcome and ultimately become stronger. 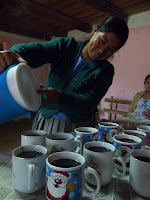 Las Progresistas (Progressing Women) Village Bank is a fantastic example. Formed February 2010, the group faced problems when three members regularly missed repayment meetings and refused to contribute to their savings account. Naturally, group morale was low and a solution was needed. Instead of dismantling, the remaining members removed the incompliant women and invited trusted neighbors to fill the vacancies. They held fundraisers to pay off the former members’ debt. Las Progresistas now consists of nine members, all of whom are in the business of raising and selling small animals. A very strong team, they continue to organize small fundraisers but now use the proceeds to grow their savings accounts. During the holiday season members sold cups of delicious mazamorra, a popular hot drink made from boiling purple corn with pineapple, apples, cornstarch and lots of sugar and cinnamon. 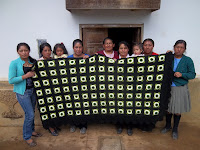 Today, Las Progresistas truly live the definition of “progressing women.” In recognition of their perseverance, solidarity and strength, DiscoverHope proudly awarded Las Progresistas with the distinction of “Top Bank of 2011.”

Upon receiving the award, Isabel De La Cruz, the President of Las Progresistas said “We are proud to be this year’s Top Bank. As one of the original members I feel so blessed that instead of quitting, we decided to stay and make our bank a place where we can improve our businesses and learn new activities. Thank you, DiscoverHope.”
Posted by John Thornborrow at 7:43 AM No comments: